In most cases when a fiber is used, it is essential to prepare clean ends. A first step is usually to strip the polymer coating on the last centimeters, using a mechanical stripper. In in problematic cases, one may have to use a solvent (chemical stripping). The mantle of the glass fiber will then usually be quite clean, but the fiber end, if it simply has been broken, will still have an irregular shape. We thus need some method to obtain a nice surface – normally, a flat surface, which is perpendicular to the fiber axis, or sometimes with some other angle.

The most common method for preparing clean ends is cleaving. Essentially, this means controlled breaking of the glass of the bare fiber. One begins with making a tiny scratch on the side of the fiber, e.g. with a sharp diamond, carbide or ceramic blade, before or while some defined tension or bending is applied to the fiber. This causes the fiber to break, starting at the mentioned fracture point. Often, the resulting surface is quite smooth.

Cleaving is often done with a simple diamond blade. One slightly scratches the fiber and then breaks it e.g. by tipping an end with a finger. This procedure requires some practicing, and the results are somewhat variable. For more consistent results, one needs to cleave under more controlled conditions, using a precision fiber cleaver apparatus. Some of these devices can also be used to prepare angle cleaves (see Figure 2), with a relatively well controlled angle between the cleaved surface and the fiber axis.

Cleaving gets more difficult in non-standard situations, such as large fiber diameters or non-standard glass compositions. When cleaving fluoride fibers, for example, one at least needs to use adapted parameters for a precision cleaver.

Recleaving a fiber can be a substitute for cleaning, as it is hard to reliably clean fiber ends.

For very high-quality fiber surfaces, or when using fibers with large diameter, or when attaching a fiber connector, it may be necessary to apply some polishing procedure after cleaving. One may, for example, insert the fiber end into a ferrule (a hollow ceramic, glass or metal tube) and fix it there with a glue. The fiber is then polished down together with the glass tube, using a special polishing machine. This procedure allows one to produce a high-quality surface with an arbitrary well-defined orientation of the fiber surface. However, it takes substantially more time than simple cleaving, and of course it is essential to have all details of a polishing machine (e.g., the load force, speed and time) and the polishing agent well adapted to the ferrule and fiber material and size. Hand polishing is also possible, but usually leads to inferior results.

Polished fiber ends, other than cleaved ends, may have some convex curvature, resulting from the use of a flexible polishing pad. Such a “domed surface” facilitates a good contact e.g. between two single-mode fibers in a connector set.

In some cases, it is important to have a cleaved fiber surface just perpendicular to the fiber axis. For example, this is often the case when a fiber is inserted into a fiber connector (see part 6), although some connectors require angle cleaves. Mechanical splices also don’t work well with non-perpendicular ends (see Figure 1).

Figure 1: When a fiber cleave is not perpendicular, a fiber joint will not work well: an air gap will be formed, or alternatively a kink.

Note that due to refraction at the fiber end, a non-normal cleave causes a deviation of the output beam direction from the fiber axis (see Figure 2). Also, one then requires an appropriately tilted input beam for efficient launching. This makes the use of angle cleaves somewhat inconvenient.

Figure 2: When light comes out of a fiber with angled cleave, it will be somewhat deflected. The direction for reflected light is also shown; it will not go back to the fiber core.

The cleave angle also has an important influence on back-reflected light. If it is small, light reflected at the output surface (Fresnel reflection due to the index difference to air) will essentially travel backward in the fiber core. For large enough cleave angles, however, the light will entirely get into the cladding and will be lost there. This means that there is a very large return loss (e.g. 60 dB) despite a significant reflection, which for a normal cleave would cause a return loss of only 14 dB.

It depends on the fiber details how large the cleave angle needs to be for a high feedback suppression. For a usual single-mode fiber, for example, the mode has a beam divergence of several degrees. One may then require a cleave angle as large as 8°, for example. For a fiber with high numerical aperture, it may be even more. For large mode area fibers, however, rather small cleave angles are sufficient to suppress feedback.

In some cases, the Fresnel reflection from a fiber end is utilized, e.g. for an effective output coupler of a fiber laser, or in optical time-domain reflectometry (OTDR).

In most cases, fiber ends are just flat – either perpendicularly cut or at some angle against the fiber axis as discussed above. In some cases, however, one uses different geometrical shapes of fiber ends:

Optical fibers can be joined together, such that light is efficiently transferred from one fiber to another. There are various possibilities:

A frequently asked question is how large will be coupling losses e.g. at a mechanical splice, when there is some kind of imperfection, for example

It turns out that some of the answers are quite different for single-mode and multimode fibers.

It is relatively easy to calculate coupling losses for single-mode fibers. Essentially, the guided mode from the first fiber (the input) creates some amplitude profile in the second fiber, which may be somewhat displaced, for example, due to an imperfect splice. One can now calculate the coupling efficiency as an overlap integral between that amplitude profile and that of the guided mode of the second fiber. (Numerical beam propagation is not required.)

A similar equation can be used for an angular mismatch:

The following figures are based on the equations above. 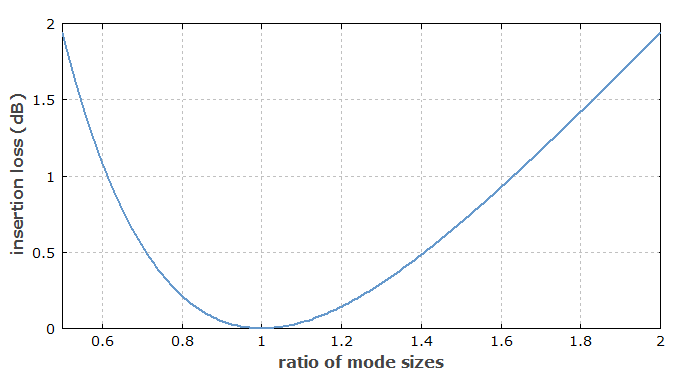