When light propagates as a guided wave in a fiber core, it experiences some power losses. These are particularly important for long-haul data transmission through fiber-optic telecom cables.

Propagation losses in fibers can have various origins:

Intrinsic losses are usually quite uniform over the length of a fiber. For additional losses, that is not necessarily the case; for example, irregularities of the core/cladding interface or chemical impurities may not be smoothly distributed.

Figure 1 shows the intrinsic unavoidable propagation losses of silica fibers. There is a loss minimum of ≈ 0.2 dB/km around 1.55 μm (which happens to be the wavelength region where erbium-doped fiber amplifiers work well). Some telecom fibers as developed for long-haul optical fiber communications nearly reach that low loss level, which requires a very pure glass material. If the fiber contains hydroxyl (OH) ions, additional peaks at 1.39 μm and 1.24 μm can be seen in the loss spectrum. 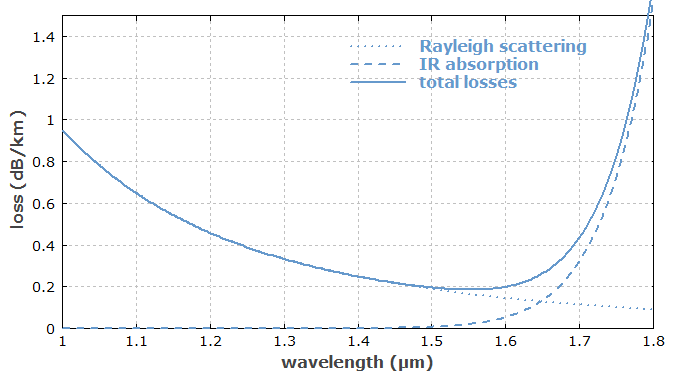 Figure 1: Intrinsic losses of silica. At long wavelengths, infrared absorption related to vibrational resonances are dominating. At shorter wavelengths, Rayleigh scattering at the unavoidable density fluctuations of the glass is more important.

If the fiber losses are only 0.2 dB/km, this means that even after 100 km of propagation distance one still has 1% of the original optical power. That is often sufficient for reliable detection of data signals, even at very high bit rates.

Multimode fibers often have somewhat higher propagation losses, because they often have a higher numerical aperture.

Bend losses are propagation losses which arise from strong bending of a fiber, for example. Typically, such losses are negligibly small under normal conditions, but steeply increase once a certain critical bend radius is reached. That critical radius is rather small for fibers with robust guiding characteristics (high numerical aperture) – it can be as small as a few millimeters. However, for single-mode fibers with large effective mode areas (large mode area fibers having a very low numerical aperture), it can be much larger – often tens of centimeters. Such fibers then have to be kept quite straight during use.

For the calculation of bend losses, there are certain analytical formulas, based on simplified models, which may or may not accurately reflect reality. Numerical beam propagation is often the method of choice; it does not require stronger simplifications and tells us in detail what happens to the light.

As an example, consider a few-mode fiber with a core radius of 20 μm and a low numerical aperture of 0.05. As a test, we arrange the fiber such that the bending becomes tighter and tighter along the length of the fiber: the inverse radius of curvature increases linearly with the propagation distance. The launched light is entirely in the fundamental mode. 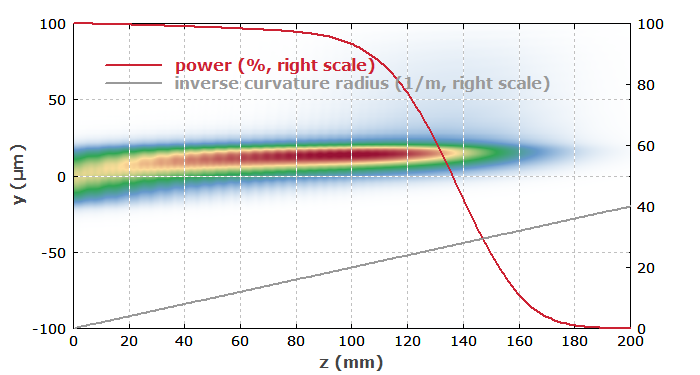 Figure 2: Amplitude distribution along the fiber for increasing bending. The beam propagation was numerically simulated with the RP Fiber Power software.

Figure 2 shows the simulated amplitude distribution in the y-z plane. One can see that the mode gets more and shifted to one side (the outer side of the bending curve), gets substantially smaller, and finally loses more and light to the cladding. In the middle (z = 100 mm), the bend radius has reached a value of 50 mm; that is about the critical bend radius.

For the LP11 mode, attenuation through bend losses gets more serious, as shown in Figure 3. Here, the bend losses set in earlier, and basically all power is lost already after 120 mm. 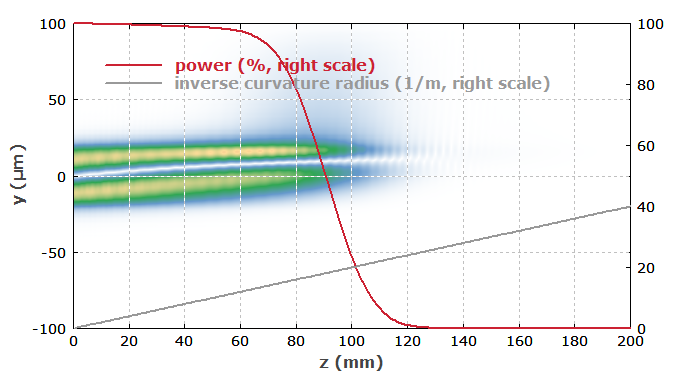 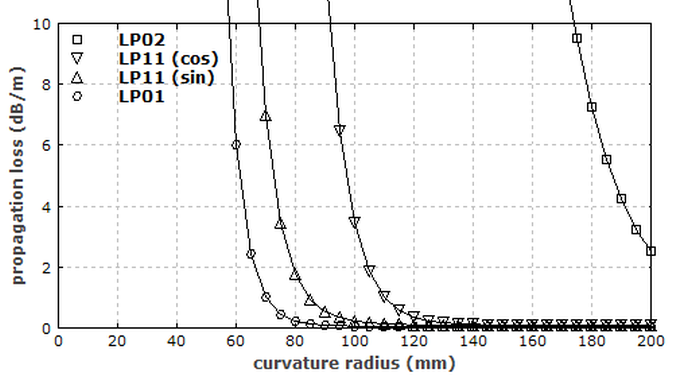 Figure 4: Bend losses as a function of the bend radius for different guide modes of the fiber.

In principle, a fiber with a fully rotationally symmetric design should have no birefringence. It should thus fully preserve the polarization of light. In reality, however, some amount of birefringence always results from imperfections of the fiber (e.g., a slight ellipticity of the fiber core), or from bending. Therefore, the polarization state of light is changed within a relatively short length of fiber – sometimes only within a few meters, sometimes much faster.

Note that the index difference between polarization directions is not necessarily larger in fibers than in other devices. However, fibers tend to be long, so that even weak index differences can have substantial effects.

Another important aspect is that the resulting polarization changes are not only random and unpredictable, but also strongly dependent on the wavelength, the fiber’s temperatures along its whole length, and on any bending of the fiber. Therefore, it often doesn’t help that much to adjust a polarization state, e.g. using a fiber polarization controller (see below); some slight changes of environmental parameters or wavelength may again spoil the polarization.

Strong bending of a fiber introduces birefringence. This means that some appropriate length of fiber, bent with a certain radius and fixed on a coil, can have a relative phase delay of π, or π/2, for example, between the two polarization directions. It can thus act like a λ/2 waveplate (half-waveplate) or a λ/4 waveplate (quarter-waveplate). If one rotates the whole coil around an axis which coincides with the incoming and outgoing fiber, one obtains a similar effect as for rotating a bulk waveplate in a free-space laser beam. One often uses a combination of an effective quarter-waveplate coil with a half-waveplate coil and another quarter-waveplate coil in series to transform some input polarization state into any wanted polarization state. Such a fiber polarization controller (Figure 5) can work over some substantial wavelength region.

Figure 5: A “bat ear” polarization controller, containing three fiber coils which can be rotated around the input fiber’s axis.

Fibers can be made polarization-maintaining (PM fiber) – but not by avoiding any birefringence! To the contrary, one intentionally introduces a significant birefringence. Such fibers are thus high-birefringence fibers (HIBI fibers).

There are essentially two common ways for doing that:

Figure 6: Polarization-maintaining PANDA fiber (left) and bow-tie fiber (right). The built-in stress elements, made from a different type of glass, are shown with a darker gray tone.

For non-monochromatic light, the situation becomes even more complicated. Over some length of fiber, the different wavelength components will experience different polarization-dependent phase shifts, so that the resulting polarization state becomes wavelength-dependent. To convert that back into a linear state would be difficult task – a simple polarization controller could not do that.

The need to align the input polarization state to a fiber axis in order to have the polarization preserved is of course a serious practical disadvantage of PM fibers. It requires more work to fabricate PM fiber-optic setups, for which additional equipment is required. Also, not all fiber components are available as PM versions. On the other hand, detrimental effects of drifting polarization states, which may otherwise require other measures, are safely avoided with PM setups.

Note that the introduced birefringence essentially removes any effect of some small additional random birefringence, as can result from moderate bending, for example. Such random influences may only very slightly change the local polarization, but will normally not have any significant effect on longer lengths. One can understand this by considering mode coupling: significant mode coupling requires a perturbation which has a period equal to the beat period of the two polarization states. For strong birefringence, that beat period (the polarization beat length) is rather short (for example, a few millimeters), and the usual perturbations are spatially too “slow” to cause any significant coupling, or at least do not have a strong spatial Fourier component according to the polarization beat.

Another way of eliminating polarization issues is to design devices such that polarization does not matter. This approach is usually taken in optical fiber communications, for example. One simply takes care that no components are used which could cause substantial polarization-dependent losses, or which would rely on a certain polarization state. For example, one generally cannot use electro-optic modulators, and needs to carefully design any semiconductor devices for low polarization dependence. Some polarization effects still remain, which may limit the performance of very fast fiber-optic links. In particular, there is the phenomenon of polarization mode dispersion (PMD), which may be quantified as a differential group delay (DGD): signal components with different polarization may require slightly different times for traveling through a fiber cable, and that may deteriorate the signal quality. For short transmission distances and/or moderate bit rates, however, PMD is not a big issue.